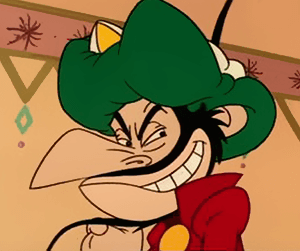 "His nose was the kind that had trouble with swing doors and reminded you of Rome's bloody history."
— Sven Hassel
Advertisement:

Almost anytime a character has a large nose, he's a bad guy. Villains have big noses. They might be long and pointy, or a giant hook down their face, and may be emphasized with Creepy Shadowed Undereyes. Bonus points if he has a mustache that he can twirl like a true Dastardly Whiplash. But for whatever reason, bad guys rock the big noses. Maybe it's symbolic of how ugly they are on the inside? Maybe it's just to distinguish between the honest good guys and the less honest bad guys for the audience. No one nose.note Hold your tomatoes, please.

It's one of the great mysteries of life. One speculation is that children tend to have small, upturned noses, and since Children Are Innocent, large noses are associated with age and lack of said innocence. (This is similar to Hair of Gold, Heart of Gold.)

This is a common characteristic in anti-Semitic stereotypes, especially if the nose in question is crooked and many Greedy Jew stereotypes can be found with some kind of beak-like nose. The word "schnoz" derives from "schnozzle" which in turn derives from the Yiddish "shnoits" for "snout".

A very common feature of the Wicked Witch, and consequently often shows up on the Witch Classic as well even when she's not meant to be portrayed as sinister.

It's also sometimes done in Anime, usually as a reference to Tengu, who are said to have large noses.

Sister Trope to Villainous Cheekbones and Thin Chin of Sin. Compare Gag Nose, when it's played for laughs.