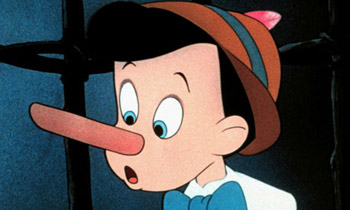 The nose knows you're lying.
"There are two kinds of lies, lies with short legs and lies with long noses."
— The Adventures of Pinocchio

A character has some specific tell, often a particular tic which gives them away when they lie. Of course, another character is bound to pick up on this.

The Trope Namer, of course, is Pinocchio's nose, which increased in size whenever he lied.

The first step to becoming a Consummate Liar is to make sure you don't have any of these. These are impossible to hide from a Living Lie Detector. This is how You Can Always Tell a Liar. If the signal is really obvious, the character effectively (though not technically) Cannot Tell a Lie.

See also The Tell for characters with a tell that points to their emotional state rather than their honesty.

Not to be confused with a Gag Nose (except of course that Pinocchio's own nose is an example of both tropes). And no relation to Pinocchio Syndrome.

Rumack's nose starts to grow, as he lies to the passengers. He doesn't appear to notice.

Rumack's nose starts to grow, as he lies to the passengers. He doesn't appear to notice.