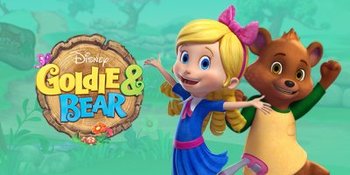 "Life is one big happy ending..."
Once upon a story / In a forest far away / Goldilocks met up with Bear and they began to play! / Now they're friends forever since she broke his little chair / It's a very merry fairytale... it's Goldie & Bear!
Advertisement:

Goldie & Bear is an All-CGI Cartoon series aired on Disney Junior beginning in 2015. The series was actually first introduced on the network's mobile app before making the leap to television. The series is a twist on the traditional fairy tale of Golidlocks and the Three Bears, the idea being that after Goldie broke Bear's favorite chair, they made up and became best friends. Together, they explore and play in Fairytale Forest, interacting with a hodge-podge of fairy tale and nursery rhyme characters, including The Big Bad Wolf, The Three Little Pigs, Little Red Riding Hood and her grandmother, Jack and the giant, Jack and Jill, Humpty Dumpty, the little old lady who lived in a shoe and her children, Thumbelina and many others beside. There's one song per episode and the two usually end up getting into some kind of adventure or trouble, but everything works out happily in the end.

A second season began airing in September 2017. The first season of the show has been made available on Netflix. In Mid-July 2018, it was suddenly announced that the series had been cancelled after two seasons. The reason why remains a mystery.

Bear finds one of the downsides of being big.

Bear finds one of the downsides of being big.