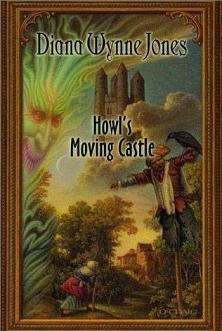 The first book in the Wizard's Castle series of young adult fantasy novels by Diana Wynne Jones, which gleefully lampshades and parodies many tropes common to the Fairy Tale genre.

Sophie Hatter is a sensible young woman who utterly lacks any confidence in herself. She works in a hat store owned by her late father, where she feels resigned to spend the rest of her days, until one day an encounter with the dashing and handsome young wizard Howl marks her as a target of the Witch of the Waste, a jilted former lover of Howl's. Mistaking Sophie for her sister Lettie, the Witch places a curse on Sophie which turns her into an old woman. After this transformation, Sophie exiles herself from her hometown and happens to become a house cleaner for Howl - who lives inside a moving castle with magic doors leading all over the country. The castle is powered by the grumpy fire demon, Calcifer, who is linked to Howl in a mysterious magical contract. Calcifer, however, has grown to resent Howl over the years and agrees to free Sophie from her curse if she can, in turn, somehow void his own agreement with Howl. As Sophie and Howl grow closer, it becomes more and more apparent that all is not as it seems.

Indeed, the main theme of the book is that everything in the story is something else, having been transformed by magic.

The book was adapted into an anime film by Hayao Miyazaki.

The book kicked off a series. The first sequel, Castle in the Air (not to be confused with Miyazaki's other film, Laputa: Castle in the Sky), continues the story from the point of view of a new character, in the midst of a war, wherein most of the characters he runs across are characters from the first book, only (a) disguised or otherwise not what they once were and/or (b) described in such a way as to make the reader unaware of the connection (seeing as the sequel's hero doesn't know any of them, he can't very well recognize them for us, either). It uses tropes and settings from the Arabian Nights.

The second sequel, titled House of Many Ways, is set a couple of years after its predecessor. Again, a new protagonist is introduced as the book follows the story of Charmain, a sheltered bookworm who is assigned to care for a cottage for her Great Uncle (who is also the Royal Wizard) but soon discovers the cottage is a magical labyrinth in disguise. The cast of the first book are given more involved roles than their cameo appearances in Castle in the Air, but still stay secondary to Charmain's plot.

Advertisement:
open/close all folders
Tropes Present in the Series as a Whole