This page refers to the book Howl's Moving Castle and the anime version directed by Hayao Miyazaki.

Sophie Hatter
Sophie Hatter is the protagonist of the first book called Howl's Moving Castle. She is a young lady living in the small town of Market Chipping in the fictional kingdom of Ingary. She is the eldest of three sisters (Sophie, Lettie, and Martha Hatter). In the land of Ingary, this of course means that she is destined to never find her fortune, and live a very dull life at home. She works in her late father's hat shop as her stepmother, Fanny Hatter's apprentice. One day, she is cursed by the Witch of the Waste, and seeks refuge in Howl's castle, where she makes a bargain with the fire-demon Calcifer to break Howl and Calcifer's contract in exchange for Calcifer breaking her curse.
Advertisement:
Wizard Howl/Howell Jenkins
The terrifying wizard whom everyone in Market Chipping believes eats girls' hearts and is as bad as the Witch of the Waste. In fact, a rather vain, childish, but basically decent Welsh wizard who is desperately trying to slither out of his responsibilities and avoid the Witch of the Waste, whom he once jilted.
Calcifer

Howl's fire demon and the driving force behind his castle. Originally a falling star, Calcifer was caught by Howl and entered into a contract with him: in exchange for Howl's heart, Calcifer would make Howl's magic more powerful. He is, however, rather unhappy with the way Howl is treating him, and wants the contract to be undone. He enlists Sophie's help for that purpose.

Howl's teenage apprentice, Michael is 15 years old in the beginning of the story. When he was kicked out of his old house in Porthaven because he could not afford to pay rent, a destitute Michael slept on Howl's doorstep. Eventually, Howl agreed to let Michael live with him and took him on as an apprentice. He is in love with Martha, Sophie's youngest sister.

Mrs. Pentstemmon is an extremely powerful sorceress who lives in Kingsbury. For many years, she has tutored apprenticing wizards and witches, and has taught some of the most powerful. Wizard Howl was her last apprentice, who left halfway through his tutelage and never returned to complete it. She is quite old and regal, giving off a more royal air than the King of Ingary himself.

The court wizard of Ingary, who has gone missing before the start of the book.

Sophie's second sister. She is very beautiful and interested in studying magic.

Sophie's youngest sister. She is an apprentice at a bakery in Market Chipping and is in love with Michael.

Fanny is the step-mother of Sophie and Lettie, and the mother of Martha. After the death of his first wife, Mr. Hatter married Fanny, who had been his shop assistant. Fanny helped Mr. Hatter run the shop until his death, after which she took over. She loves all the girls equally, and does her best to provide for them after Mr. Hatter's death.

The Witch of the Waste

A beautiful-looking witch who terrorized the Land of Ingary before being banished to the Waste by the King. 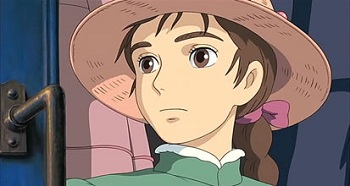 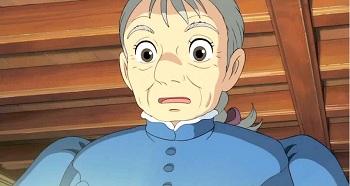 "When you're old, all you want to do is stare at the scenery."

Sophie Hatter is the main character in the first book called Howl's Moving Castle. She is a young lady living in the small town of Market Chipping in the fictional kingdom of Ingary. She is the eldest of three sisters (Sophie, Lettie, and Martha Hatter). In the land of Ingary, this of course means that she is destined to never find her fortune, and live a very dull life at home. She works in her late father's hat shop as her stepmother, Fanny Hatter's apprentice. 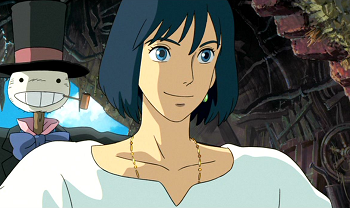 "Now I've got something I want to protect. It's you."

Howl Jenkins Pendragon is a powerful wizard living in the land of Ingary. Originally Howell Jenkins of Wales, he was part of a loose fraternity of wizards on Earth. He made his way through a magical portal to Ingary, where he became known and respected as one of the most powerful wizards there was. He owns a moving castle, and spreads rumors about himself to retain his privacy, opting to be alone and hiding from all conflict.

The Witch of the Waste
Voiced by: Akihiro Miwa (JP), Lauren Bacall (US) 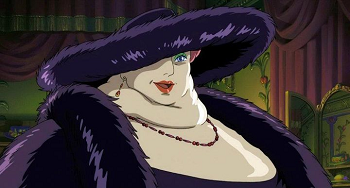 "The best part of that spell, is that you can't tell anyone about it."
CLICK HERE FOR SPOILERS 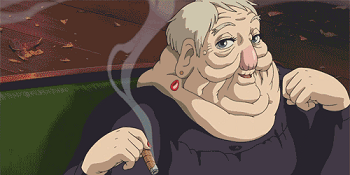 "It looks like your true love is in love with someone else."

The Witch of the Waste is an antagonist of Howl's Moving Castle. 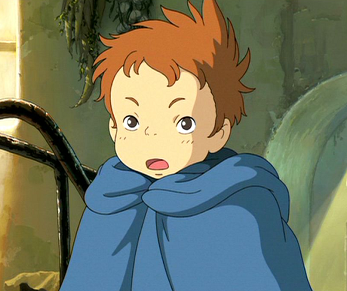 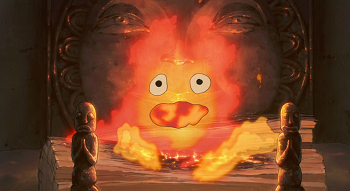 "May all your bacon burn." 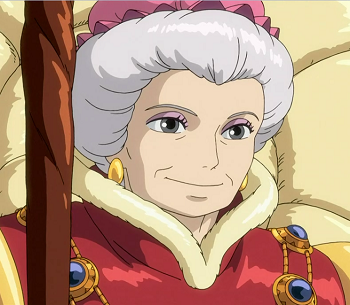 "It's time to put an end to this idiotic war."

Turniphead
Voiced by: Yo Oizumi (JP), Crispin Freeman (US) 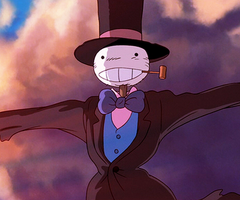 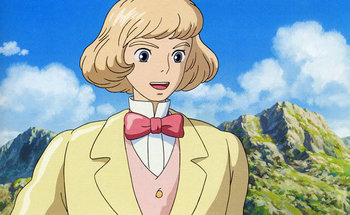 Turnip-Head is a cursed scarecrow who appears in both the book and movie versions of Howl's Moving Castle.
Heen 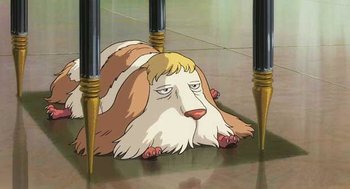 Heen is a small and very ancient white and brown dog who appears only in the movie. 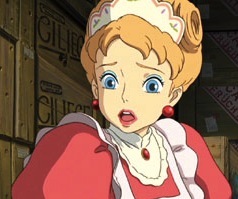 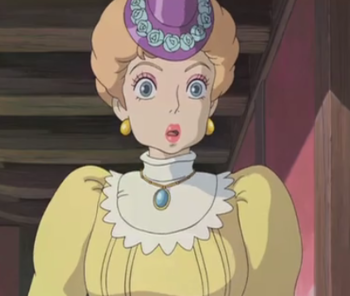 Fanny (Honey) Hatter is Mr. Hatter's second wife who was once his shop assistant. She is only Lettie's biological mother, though cares for her and Sophie equally. After Mr. Hatter's death, she runs the hat shop for some time, with Sophie apprenticing. After Sophie leaves the shop, Fanny meets a rich man and marries him, and as a consequence sells the shop.