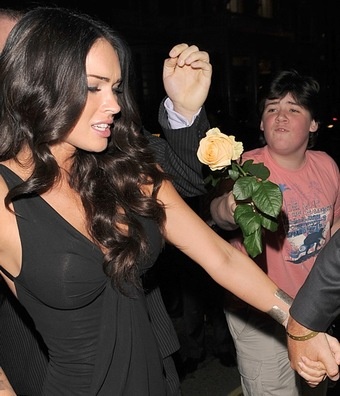 "There's a girl I know
He loves her so
I'm not that girl..."
— Elphaba, Wicked
Advertisement:

It's a simple story:

This is Triang Relations #4: a character who has a crush on someone who's already engaged in (at least potential) Shipping with someone else. After all, All Love Is Unrequited. Distinct from the Romantic False Lead in that the latter will actually catch the Girl's attention and make Boy jealous and uncomfortable (forming a Love Triangle).

The Hopeless Suitor thinks that their rival is a Romantic False Lead when in reality there was no competition in the first place; the object of their affection simply doesn't notice them. The center of the love triangle will always think the Hopeless Suitor is just a friend.

In rare, very rare occasions, through sheer determination as befitting a Dogged Nice Guy, they might win over the object of their affection. It very well might take years or decades, like a Victorious Childhood Friend. The key is that there isn't any hinting towards Unresolved Sexual Tension between them, the tension is all one-sided for a very long time before feelings are reciprocated. If any sign of affection is just to keep the suitor from falling for anyone else, this is Stringing the Hopeless Suitor Along.

Usually doesn't get as far as Stalker with a Crush, unless he's Wrong Genre Savvy enough to be a Prince Charming Wannabe. Compare Romantic Runner-Up and Unrequited Tragic Maiden. When the suitor is unattractive and/or otherwise unpleasant, and it's usually supposed to be funny, see Abhorrent Admirer. When the suitor is straight but their target is gay, or vice versa (or a suitor of any orientation is pursuing an asexual person), see Incompatible Orientation. When the admirer is too young or immature, see Precocious Crush. May result in Mad Love or Yandere if the suitor ends up being nuts.