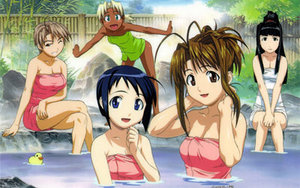 The cast finds a reason to spend an episode at a hot spring (onsen, [温泉]) — a popular type of Japanese resort/attraction similar to communal bathing.note Japanese islands are a part of the Pacific Ring of Fire

, more specifically, its most active, NW section, so various volcanic-induced phenomena, including this, are fairly common there. The same goes, to a lesser degree, for the adjacent lands in the Ring - Kamchatka and Philippines It's the Japanese equivalent of a European spa town. Naturally this provides an excusable opportunity for Fanservice if a show is so inclined, although some shows aimed at younger kids will use toweled characters. Some series that aren't geared towards younger viewers will broadcast with towels (and/or Censor Steam), but remove them from the DVD version as an incentive to buy the DVDs.

Occasionally, there may be a little ping-pong playing afterwards, and the characters will likely wear yukatas for added fanservice, and drinking some nice, cold milk.

The low-budget version of this is the sento [銭湯] episode, where the characters go to the public bath house together. Usually, it's because there's a plumbing or other utility failure at home.

This kind of scenario is so common in anime there is even a wiki that catalogues them.

Cousin to the Beach Episode and Public Bathhouse Scene. Every anime more than two episodes long will include at least one of these scenes.

During their mission to reclaim the Starseed, the group take a dip in a hot spring.

During their mission to reclaim the Starseed, the group take a dip in a hot spring.