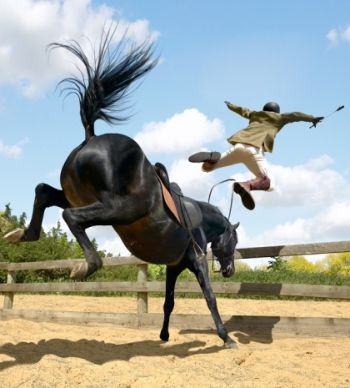 "Riding is the only thing a King learns how to do right, since a horse is no courtier and will just as soon throw a Prince as a stable boy."
— Anonymous
Advertisement:

Horses can be real bastards. Tensing up while the saddle is being strapped on, only to relax as soon as it’s mounted so that both saddle and rider are left hanging upside-down; biting hands; "spooking" and racing off with their rider; kicking anyone stupid enough to get south of their arses; and if they lie down suddenly... get off quick because they're about to roll. And as for camels...

Horses, both in fiction and Real Life, are living creatures, and come with their own personalities. They lose their tempers, they get scared, they react like you'd expect an animal to react. Often suspiciously like you would expect a dog to react. Sapient Steeds are liable to be this if you treat them badly... or possibly just because, like humans, they have a mischievous streak.

In some situations, these horses can potentially become Xenophobic Herbivores if they are intelligent, yet malevolent and sadistic enough. For outright evil, cruel, or even more dangerous horses, see Hellish Horse.

Subtrope of Moody Mount. Aversion of Automaton Horses, and in the case of wild horses of All Animals Are Domesticated. Also an aversion of horses' usual Animal Stereotype of being noble, loyal and steadfast.

Not to Be Confused with Horsin' Around.

open/close all folders
Advertising
Anime & Manga
Advertisement:
Comic Books
Fan Fiction
Films — Animated
Films — Live-Action
Literature
Live-Action Television
Music
Mythology & Folklore
Newspaper Comics
Pinball
Tabletop Games
Video Games
Webcomics
Web Original
Western Animation
Real Life
Horses are still animals. Very big, powerful animals. Aside from the obvious danger of a kick or a nasty bite (which can be severe enough to disable or even kill), they can also spook or bolt if they're stung or startled, leaping or galloping off in a panic. When that happens getting dumped is almost inevitable. Worse, some horses have a nasty habit of lying down suddenly to roll in the grass... while you're still on them. The results can be fatal. So if your horse goes down suddenly... IMMEDIATELY get off the horse. Goes double if it's in the water.
Feedback

The job of Royal Messenger isn't without horse-related mishaps, as Sir Robert Carey relates in his journal. Unfortunately, Tony Robinson ends up accidentally replicating one such mishap when his horse gets a tiny bit overexcited...

Ready for a Ride

The job of Royal Messenger isn't without horse-related mishaps, as Sir Robert Carey relates in his journal. Unfortunately, Tony Robinson ends up accidentally replicating one such mishap when his horse gets a tiny bit overexcited...

Ready for a Ride