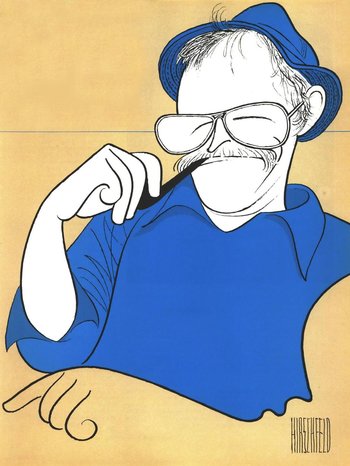 Patrick Francis McManus (August 25, 1933 – April 11, 2018) was an American humorist who wrote about outdoor activities such as hunting and fishing. His dry style of humor has invited comparisons to Mark Twain and S. J. Perelman, among others.

For many years McManus contributed comedic essays and short stories to (and served as an "editor-at-large" for) Outdoor Life magazine. Said stories, which have also been reprinted in several book collections, usually focus on his misadventures in the outdoors or recount highly-fictionalized anecdotes from his youth, which was mostly spent in the small town of Sandpoint (aka "Blight"), Idaho.

After the Turn of the Millennium, he turned to writing a series of comedic mystery novels set in an even more fictionalized modern-day Blight starring County Sheriff Bo Tully and a supporting cast of oddballs; Tully's elderly father is essentially an Author Avatar. The sixth and last of these was published in 2014, after which McManus announced his retirement from writing and public life. He died in 2018 at the age of 84.