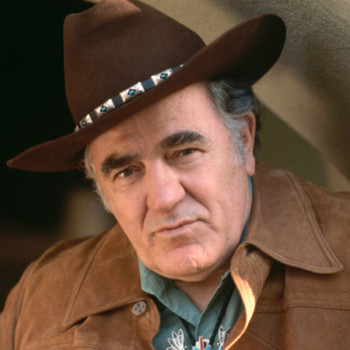 A Trope Codifier for The Western, Louis L'Amour note born Louis La Moore, but he changed his name because Everything Sounds Sexier in French (March 22, 1908 – June 10, 1988) wrote eighty-six novels and numerous other short stories over the course of his life. While Westerns were his preferred genre, he referred to all of his novels as "frontier stories" and wrote historical fiction set in other eras as well, plus the occasional thriller or fantasy.

Where other adventure writers can talk the talk, L'Amour walked the adventurer walk. At the age of fifteen he left home and began Walking the Earth, eventually becoming a merchant seaman and then serving with the United States Army in World War II, and at one point or another visited every continent except Antarctica.

He died of lung cancer on June 10, 1988. His autobiography, Education of a Wandering Man, was published posthumously.

Works by Louis L'Amour with their own pages:

Other works by Louis L'Amour contain examples of:

Sheriff Redman: Them Jacksons never die alone. If one of 'em has a gun he'll take somebody along!