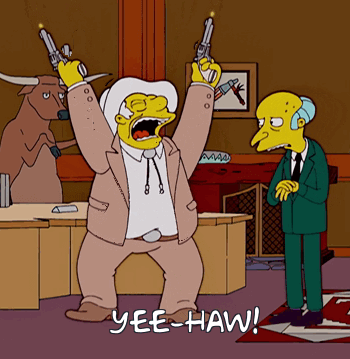 A Cattle Baron is the Rancher writ large. Instead of owning one regular-sized ranch, the Cattle Baron will own several ranches, possibly in more than one state, or a county-sized one with many thousand head of cattle. He (or very rarely she) will be one of the wealthiest people in the territory or state, and one of the biggest employers.
Advertisement:

A Cattle Baron is generally at least middle-aged—it takes a while to accumulate that much capital. Some will be homegrown types who struggled their way up from single ranches, while others are foreigners (English and German are popular nationalities for this) who simply bought up land. Their clothing, tack and homes will tend to be rather ostentatious, but somewhat practical for range life.

Cattle Barons in fiction will usually have either grown or nearly grown children, a beautiful daughter and/or either a rebellious or dutiful son. Conflicts between the children, and with their parents, are frequent.

In The Western, a Cattle Baron will often be the Big Bad of the story, (Aristocrats Are Evil, even if the "Baron" bit is metaphorical with "Robber Baron") with the desire to buy out or crush independent ranchers and homesteaders to add to his wealth and power. However, they can also be a benign employer for a protagonist if their holdings are plagued by rustlers. Expect them to be rather autocratic in any case.

Often a Small-Town Tyrant, and perhaps a Fat, Sweaty Southerner in a White Suit. Compare the Railroad Baron.