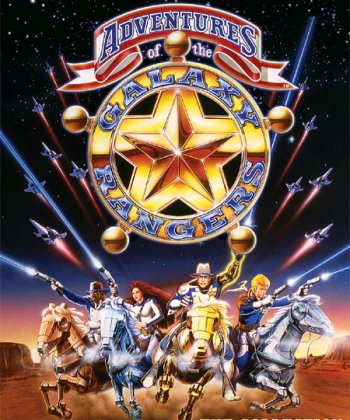 "No Guts, No Glory!"
"In 2086, two peaceful aliens journeyed to Earth, seeking our help. In return, they gave us the plans for our first hyperdrive, allowing mankind to open the doors to the stars. We have assembled a team of unique individuals to protect Earth and our allies. Courageous pioneers committed to the highest ideals of justice and dedicated to preserving law and order across the new frontier. These are the Adventures of the Galaxy Rangers!"
—The Opening Narration
Advertisement:

This critically acclaimed 1986 series was the first of three animated Space Westerns to air in America during the late 1980s.note The others being Bravestarr and Saber Rider and the Star Sheriffs (both premiering in 1987, a year after Rangers), though one could argue that Silverhawks (1986) is a Space Western as well.

To elaborate on the Opening Narration: The peaceful aliens represent several planets who are endangered by The Crown Empire, an interplanetary dictatorship headed by the tyrannical Queen of the Crown. Thanks to the hyperdrive, Earth begins to interact with alien worlds and colonize distant planets, which leads to a culture that resembles a futuristic version of The Wild West. Unfortunately, it also leads to danger from spacegoing outlaws, as well as The Crown Empire, which wants to enslave every species it encounters — especially the human race. The crimefighting organization BETA (the Bureau of Extra-Terrestrial Affairs) is formed to protect Earth from these threats. BETA's best-known agents are the Galaxy Rangers, four fearless "space cowboys" (well, one of them's a cowgirl) who each have different powers provided by Series Five brain implants. The Rangers are cyborg team leader Zachary Foxx, shapeshifting Cowboy Cop Shane Gooseman, psychic Action Girl Niko, and wisecracking Techno Wizard Walter "Doc" Hartford. More information about the Rangers, and their friends and enemies, is available at the character sheet.

For a kid-oriented Animated Series from The '80s that had a breakdancing robot in it, Galaxy Rangers has earned a surprising amount of respect from adult fans. The show was sophisticated for an American Animated Series of its time, and between the involvement of TMS Entertainment and the epic storylines, it had an Animesque feel that few of its competitors could match. Even now, it still has a solid fanbase.

Series creator Robert Mandell also went on to do Princess Gwenevere and the Jewel Riders in the 90's.

The Adventures of the Galaxy Rangers have their own wiki here.