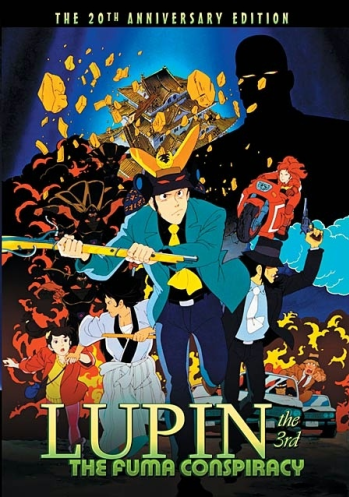 A Ronin and Thieves and Ninja... Oh, My!
Originally released in 1987, this is the first — and until 2002's Return of the Magician, only — OVA in the history of the Long-Running Lupin III franchise. The sub-title has also been rendered as Plot of the Fuma Clan and Mystery of the Fuma Clan.
Advertisement:

It is even more notable as the only Lupin III release to use none of the usual Japanese voice actors (or music composer) associated with the series, a decision made by TMS Entertainment for budgetary reasons.note At the time, the Lupin cast were the highest-paid voice actors in Japan. This was the only time in the entire franchise till 2021 where you would not hear Kiyoshi Kobayashi voicing Jigen, for instance. Due to communication breakdown, the decision to use new actors was misinterpreted by Lupin's seiyuu, Yasuo Yamada, as original creator Monkey Punch being unhappy with his performance and wanting a new voice cast. In reality, while Monkey Punch did not like TMS's decision, he felt he had no control over it and did not fight it. Sadly, this incident put a permanent strain on Yamada and Monkey Punch's friendship, which remained unresolved at Yamada's death in 1995. Since then, no regular Lupin character has been re-cast until the actor dies or chooses to retire.

The special opens with the wedding of Goemon to Murasaki Suminawa, the daughter of one of his teachers. During the wedding, a precious Suminawa heirloom urn is to be handed over to Goemon to symbolize him joining the family. The ceremony is interrupted by Ninja, who are fought off by Goemon and his friends Lupin, Jigen, and Fujiko. The ninjas fail to steal the urn, but do make off with Goemon's bride. In exchange for her return, the ninjas of the Fuma clan want the urn, which is the key to finding a secret treasure hidden in the mountains of Japan. Lupin and his gang work to both rescue Murasaki and take the treasure for themselves. Meanwhile, Zenigata, who believes Lupin to be dead following an explosion, comes out of retirement when he finds out his long-time rival may have survived after all...

Fuma did receive a feature-film release after its release as an OVA, in spite of its short (70-something minutes) length. It was released twice in North America, once by AnimEigo and again by Discotek Media, though both editions are currently out of print.

Complete spoilers below – don't read further if you don't want to know how this caper turns out!