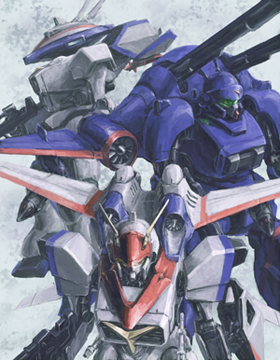 The year is 2087, and mankind has started expanding into outer space, founding colonies on the Moon and advancing dramatically in technology and generally improving the living conditions for everyone. However, a dark shadow is cast over this future, as the Moon colonies, under the leadership of Marshall Iskandar Guiltorre, declare themselves independent under the collective name of Giganos Empire.

After years of excalating tensions, brought on by the ever-growing discrimination against Earthlings on the Moon colonies, and by the construction of Giganos' Mass Driver, war finally breaks out, with Giganos Empire in an overwhelming advantage thanks to its technological superiority and the use of anthropomorphic Humongous Mecha called Metal Armors. A few months in the conflict, already 70% of Earth is under Giganos' dictatorship, and the Earth Federation is getting desperate...

Fortunately for the Federation, three new-model Metal Armors codenamed Dragonar are captured by an Allied fleet during transportation. Unfortunately, the Giganos forces immediately start pursuit, with the order of taking them back at all costs... and in the whole mess, the Dragonar end up being boarded and piloted by three teenagers from the neutral colony of Arcadia, which Giganos attacked to take back their prototypes.

Of course, much mayhem ensues, and Kain, Tapp and Light find themselves forcibly enlisted into Federation army because their mechs' AIs will only allow them to pilot it, fighting an almost hopeless war against extremely bleak odds as they try to keep Giganos Empire from reclaiming the Dragonar.

If that sounded similar to Mobile Suit Gundam to you, you're quite right - this 1987-1988 series is, in fact, very similar to Yoshiyuki Tomino 's masterpiece and shares much of its creative team with Gundam works of its time. Fukuda Mitsuo of Mobile Suit Gundam SEED fame also worked on several episodes although using a different Kanji writing of his name. However, Metal Armor Dragonar is much Lighter and Softer than the series it parallels, not only keeping death to a minimum, but also engaging in refreshing comedic episodes which manage not to detract anything from the action and the development. People who liked Gundam's bleak setting might be somewhat put off by this, but Metal Armor Dragonar presents itself as a worthy alternative.