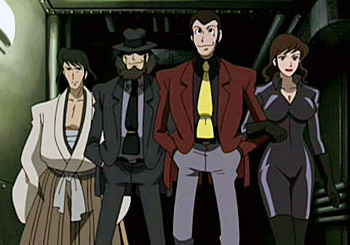 The unexpected flop of 1987's Fuma Conspiracy was a blow to TMS's efforts to revive the Lupin III franchise after the poor receptions of the Pink Jacket series and its related movie Legend of the Gold of Babylon. Yet the strong passions Fuma aroused proved that Japan had not yet given up on Lupin; TMS just needed to take a new (or old) tack...

On April 1st 1989, twenty years after the Lupin III Pilot Film was released and four years after Babylon hit cinemas, NTV aired Bye Bye Liberty Crisis, a 97-minute Made-for-TV Movie. Featuring the return of the original music composer and voice cast, it was a big hit. Since then, TMS has made an effort to have a new Lupin III special produced every year, typically airing either in April or (more recently) in late Fall. Things slowed down in the mid-2010's with 2014, 2015, 2017, and 2018 having no specials and the 2016 one re-using footage from Lupin III: The Italian Adventure, but this was likely due to the focus on The Italian Adventure and Lupin III: Part 5 in the main series, as well as the spin-off Lupin III: The Woman Called Fujiko Mine and its own three tie-in specials. Since then, 2019 saw two yearly specials (one at the beginning and one at the end of the year) and with interest in Lupin rising again, there are probably more on the way. note There was concern that the yearly specials ending was permanent... ratings for the Lupin specials had been steadily dropping for years; had a special aired in 2014, it might have seen numbers finally fall below 10% (This finally happened with Goodbye Partner in 2019).

Watching these specials is something of a trip through Japan's recent animation history. Unlike the old TV series, TMS does not make these specials in-housenote With the lone exception of Seven Days Rhapsody, which had a handful of scenes animated in-house. Animation is typically handled by other studios (including sister company Telecom Animation Film) or freelanced animation teams, who often adapt the Lupin house style to whatever artistic trend that studio or team is currently using, with TMS supplying their usual support studios to help with minor tasks like inbetweening and photography most of the time. Depending on the Artist is the rule rather than the exception here. As a result, many of these specials look wildly different from each other. This trend has affected Fujiko the most, of course, but none of the cast is immune to its effects. The animation quality, while far higher than any of the TV series, also varies from special to special.

In terms of content, these specials largely tread a middle ground – although they are certainly more kid-friendly than Monkey Punch's extremely violent and raunchy manga, they are nonetheless a fair bit darker than Red Jacket, or especially Pink Jacket. Still, because Lupin remains a beloved franchise in Japan, and these specials air in Japanese prime time, they usually stay at least nominally Shōnen for families rather than going for a more true-to-source Seinen.

One fan observation is that if Lupin's shirt is black, character deaths will involve Gorn. But if his shirt is blue, a Disney Villain Death is most likely.

Many of these specials have found their way into the American and British market. Funimation licensed and dubbed eight of them – from 1993's Voyage To Danger to 2000's Missed By A Dollar – which they released in the early/mid 2000's, though they are now out-of-print. Manga UK dubbed and released the first special, Bye-Bye Liberty Crisis, in PAL-VHS markets in the mid-90's. Discotek has picked up several specials from both before and after Funimation's block, and as of 2016, even the ones in Funimation's block have been re-entering print thanks to Discotek. Italy has released a large number of them as well, but even they do not have all of them.

Below is the list of each special to air since 1989. They are listed by their official English release name, if they had one, or the main title translated from Japanese, with the full title listed in parentheses for those with subtitles.note  The wicks to some of the specials are truncated to avoid long URL's due to Colon Cancer. Very few of these have been officially released outside of Japan, so they have no official shortened English title.

Tropes Common in Each Special