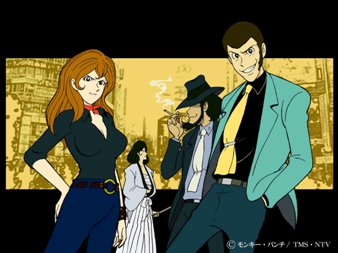 The one that started it all. Fan nicknamed "Green Jacket" for Lupin's jacket. Originally ran from 1971-1972.

Called simply Lupin III, it began airing October 24, 1971 on Nippon Television note  due to this show being co-produced by its Osaka affiliate, Yomiuri TV . The series was produced by TMS Entertainment, with several of the episodes (8-onwards) directed by future Studio Ghibli co-founders Isao Takahata and Hayao Miyazaki.

After decades of being officially available only in Japan and Italy, Discotek Media released the series on DVD in North America in June 2012, and will be reissuing the show for another DVD release (though this second release will not contain the special features the previous one had). It is also available for through Funimation (if you're in the United States).

In 2021, to celebrate the anime's 50th anniversary, TMS released a new English-dubbed version of the first episode of Part 1, first alongside theatrical screenings of the first two episodes of Part 6 in October, and then as a livestream on YouTube in November. Later in December, Discotek revealed that this was only the beginning, as they'd be releasing a remastered Blu-Ray set for Part 1 featuring a full English dub alongside an extensive production art gallery and a lengthy set of liner notes by Fandom VIP Reed Nelson. It was released on May 31st, 2022. In the meantime, HIDIVE

has acquired the exclusive streaming rights, and began airing the series on December 23, 2021, releasing 4 episodes each Thursday in both Japanese and with the new English dub.

In Japanese, the voice actors for the main characters were Yasuo Yamada as Lupin, Kiyoshi Kobayashi as Jigen, Yukiko Nikaido as Fujiko, Chikao Ohtsuka as Goemon, and Gorō Naya as Inspector Zenigata.