Anime / The Mystery of Mamo 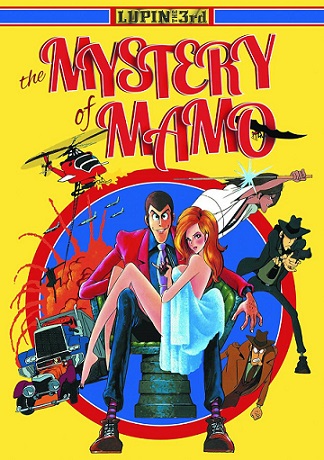 The Secret of Mamo, or The Mystery of Mamo, is the most common English name for the first animated feature film in the Lupin III franchise, made in 1978 and originally released in Japan as simply Lupin III (Rupan Sansei).note  The film is now known there as Rupan Sansei: Rupan tai Kurōn – Lupin vs. the Clones – in order to differentiate it from the four other movies that followed it. The animation style is based heavily on the original manga, rather than the cleaner appearances from the first Lupin TV series.

Lupin III has finally been hanged for his crimes, but eternal foe Inspector Zenigata isn't so sure. His instincts are rewarded when the corpse is booby-trapped by another, and very alive, Lupin III, expressing similar confusion at his own death. Deciding to take matters into his own hands, Lupin goes after the Philosopher's Stone, and sure enough draws the attention of perpetual Femme Fatale Fujiko and her mysterious benefactor. But when she steals the stone and it is revealed as a fake, things fall apart. Lupin and his gang barely survive a massive assassination attempt, and the eternally loyal Jigen and Goemon finally have enough and leave Lupin behind when he rescues Fujiko over their concerns.

Throw in American secret agents, a mysterious island with historical figures walking around, an ancient conspiracy, and several feats of what seem to be magic – all revolving around Fujiko's contractor, a shrivelled old man named Mamo. Can Lupin and his companions discover where the dead Lupin came from or what Mamo's plan is, or will they fall apart from the strain?

The movie has been licensed and released in the English-speaking world several times: First by Streamline Pictures in the early '90s, then Manga Entertainment did a UK release in the mid-'90s, then Pioneer/Geneon released it again in North America in 2003. The current license holder is Discotek Media, who put out their version of the film on DVD in 2013 and later reissued it on Blu-ray in 2022. The film is notable for being dubbed into English four times (all collected on Discotek's release).

Lupin III: The Mystery of Mamo provides examples of the following tropes: