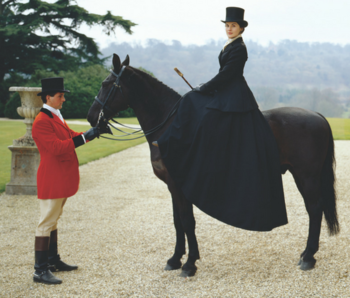 Look at my horse! My horse is expensive!
"[Harriet] knew [Wimsey] to be intelligent, clean, courteous, wealthy, well-read, amusing and enamoured, but he had not so far produced in her that crushing sense of utter inferiority which leads to prostration and hero-worship. But she now realised that there was, after all, something godlike about him. He could control a horse."
— Have His Carcase, Dorothy L. Sayers
Advertisement:

If you want to show that a character is posh and from a privileged background, a good way to do this is to give them a horse and a keen interest in riding.

Prior to the invention of the automobile, horses were frequently used as labor animals, but owning horses for riding or pulling a carriage (as opposed to a plow or cart/wagon) or going on The Grand Hunt was always only for the very rich and everything about it was expensive and heavily taxed. In modern times, owning a horse for leisure is still a definite sign of wealth, considering you need a lot of money to buy and keep a horse, not to mention additional land or funds to keep the horse in a stable. The rider can be accomplished at Equestrian Sports, while the horse itself can be utilized for other traditional upper-class pursuits such as fox hunting and polo. Note that this does not apply if the character belongs to a group where horse ownership is common or expected (eg. they own a farm, or are a member of a nomadic people).

Often Played for Laughs when the owner is a Upper-Class Twit who trots around everywhere on horseback when it really isn't necessary, or if the character is a Rich Bitch, they will lavish affection on their steed while treating everyone else with utter contempt.

Compare and contrast Pony Tale, whose protagonist's interest in horseback riding isn't necessarily because of class. All Girls Like Ponies might also be in play for female examples. The riders' prize steeds may or may not be Cool Horses. See Wealthy Yacht Owner for another common way for the upper-crust to get around. This is also a subtrope of Snooty Sports.

open/close all folders
Anime and Manga
Art
Comics
Film — Live Action
Literature
Live-Action TV
Music
Stand-Up Comedy
Theatre
Video Games
Web Animation
Western Animation
Real Life
Note: Real-life examples should be limited to modern (i.e. post-automobile) examples of people who are otherwise notable for wealth or position and who have substantial achievements in equestrianism.note Pre-automobile aristocrats generally learned equestrianism as a matter of necessity, since they needed to ride horses as officers in wartime and also to traverse their large agricultural estates in peacetime. These imperatives went away with the development of the automobile, but the tradition of casual riding lives on among most aristocracies. That said, there are many blue bloods and other wealthy people with solid achievements in modern competitive equestrianism.