Podcast / Not Another D&D Podcast 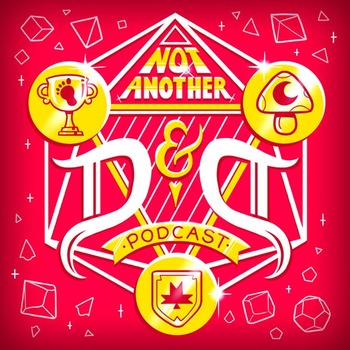 Not Another D&D Podcast (shortened to NADDPOD) is another D&D podcast, this time an Actual Play from the mind of CollegeHumor alumnus Brian "Daddy Murph" Murphy. He is joined by Jake Hurwitz, Emily Axford, and Caldwell Tanner, who all play a delightful and memorable host of characters in Brian's worlds.
Advertisement:

The podcast also features a number of side quests and one-shots, notably "The Trinyvale Adventures" with Caldwell as Dungeon Master a.k.a. "Duncle" and "The Mavrus Chronicles," which uses the Bahumia setting but has Emily taking the reins as DM.

The cast for the Bahumia campaign includes:

The first campaign has currently lead the party through the following chapters:

It also provides examples of the following tropes

I Dirty Coward: Galad Rosell talks a big game when he has the upper hand, but the second the situation turns on him, he resorts to offering sexual favors for mercy.
The Trinyvale Adventures

The cast for the Trinyvale Adventures includes:

The cast for the Mavrus Chronicles includes:

The cast for the Eldermourne campaign includes: