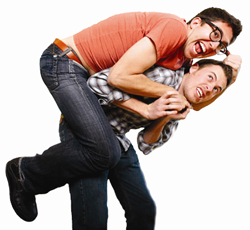 "Jake and Amir are two best friends that work together, live together, and play together. We're not really best friends, so don't type that. Yes we are. No we aren't, and we also don't live together. Whatever. Not whatever. Dinner tonight? Nope."
Description from the official website
Advertisement:

Jake and Amir is a popular internet series of short videos by CollegeHumor. Like Hardly Working, they are filmed in and around the College Humor office and revolve around Jake Hurwitz, a usually normal guy, and his co-worker, Amir Blumenfeld, an unstable, unbalanced and generally weird Manchild who is obsessed with Jake and determined to prove that they're "best friends".

In 2020, Headgum (the podcast network where both Jake and Amir work) uploaded an unofficial "Jake and Amir" episode, where the two played basically the same roles as in the original series. In 2021, they regained the rights to their sketches, and all the J&A YouTube videos were transferred from CollegeHumor to their own channel

, on which they later started making new episodes.

The complete episode archive can be found at http://www.jakeandamir.com/archive