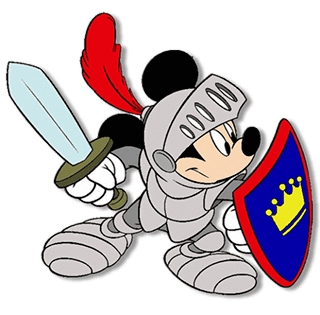 A weapons trope. As Weapon of Choice explains, a person's choice of weapon can say a lot about them, and using a sword and shield together frequently says "Knight in Shining Armor". It includes all the heroic meaning that Heroes Prefer Swords carries, plus the connotations of being a defender that go along with Luckily, My Shield Will Protect Me. Sword and Shield users might liberally make use of Shield Bash in a fight and depending on the type of shield might engage in Throwing Your Shield Always Works.

Then again, not everyone with this combination is necessarily good; it could just as easily be used in the hands of a Black Knight instead. Either way, people using swords and shields are usually "knightly" in some form or another.

As noted frequently below, many of the shields of these combinations also serve as the scabbards/sheaths for the swords. This is usually done either because it's cool or rarely, the shield being the sheath allows for a Bifurcated Weapon/Mix-and-Match Weapon combination.

Often called "Sword and Board" by tabletop game groups. Compare this trope with Sword/Shield Contrast, which discusses the competing connotations of the two items. Also see Choice of Two Weapons, which covers other dual-equipment setups.