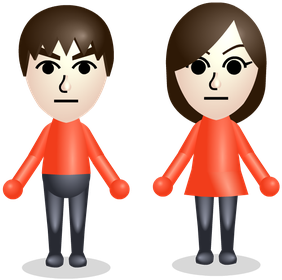 It's-a Mii!
Miis (or Mii Characters) are Digital Avatars used in Nintendo software. They are multipurpose characters that can be used in a variety of ways, to the point of being playable characters in a range of games produced for Nintendo's systems.
Advertisement:

an avatar system since the Famicom era, but technical limitations delayed their implementation until the Wii was released. Mii support has since been included with the Wii U, Nintendo 3DS and Nintendo Switch as well.

Games Starring Miis
Other Games That Use Miis Prominently

Unless otherwise noted, the following games generally have Miis as one option of several for playable characters.

Note: Due to the nature of Miis and how they're used, tropes may not apply to every place they appear.