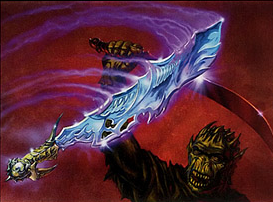 You know what the weakest point of a typical sword is? The wielder.

A flying weapon is a weapon capable of fighting without anyone touching it. It floats into the air, moves as if there were an invisible hand guiding it, and attacks freely. Some flying weapons will stay near a particular user, parrying attacks against them; others operate entirely on their own. Sometimes they're magical tools, or haunted weapons, or wielded telekinetically.

A flying weapon is very likely to be an Empathic Weapon, and may also be an Attack Animal (or even an Equippable Ally if it has a life of its own). Nearly always a Cool Sword. See also Attack Drone for the real-world high-tech equivalent. When it is a sword and used in large numbers, they may overlap with a Storm of Blades.

A Master of the Levitating Blades is basically this trope, but multiplied several times over.

Also a valid way to summon a weapon to one's hand.

Xaldin wields both the power of wind and six different lances. Of course he levitates some of them.

Xaldin wields both the power of wind and six different lances. Of course he levitates some of them.