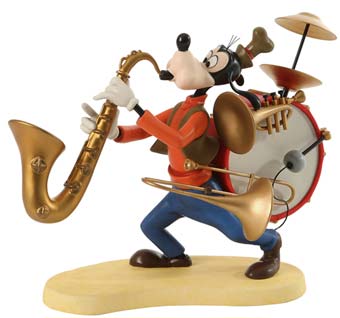 Goofy is his own melody, accompaniment, and drummer.
"Ever seen one pony play ten instruments?"
— Twilight Sparkle, My Little Pony: Friendship Is Magic
Advertisement:

Say you need some cheerful music to draw attention, but can't find anyone to help you. Then do it yourself!

Some definitions of One-Man Band define it as "being able to play two or more instruments at once." Others say "three or more instruments at once," and some purists even define it as "three or more instruments at once while able to remain mobile while cranking out the jams." "At once" is definitely the real key phrase needing to be emphasized here; while it's true that, through the magic of overdubbing, such musicians as Todd Rundgren, Prince, Trent Reznor, Dave Grohl and Paul McCartney have played all the instruments on some of their albums, we wouldn't refer to any of them as One Man Bands. (In fact, we have another trope entirely about them.) Of course Rule of Funny says the more instruments the funnier—and of course they're all badly tuned and played with no sense of melody or rhythm, prone to causing the person stuck in such an arrangement to tumble and get tangled in the resulting mess. Pretty much a Dead Horse Trope these days (except for the very occasional street performer), but a Period Piece or Historical Fiction may still have them as background characters.

Compare with I Am the Band, where one musician plays each instrument separately and combines the tracks to sound like a full band. Subtrope of Street Performer. For a lethal variant see One-Man Army.