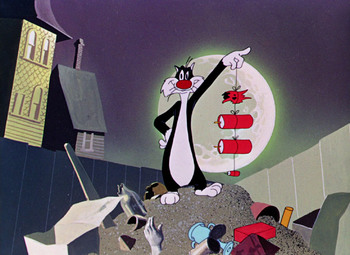 "Back Alley Oproar" is a 1948 Looney Tunes cartoon directed by Friz Freleng.

Elmer Fudd is trying to get to sleep one night. Unfortunately his rest is interrupted by Sylvester the cat, who has chosen that evening to take a perch on a fence and give a concert. Elmer tries to make Sylvester shut up, only to grow increasingly frustrated as Sylvester repeatedly escapes him.

This cartoon was The Remake of a 1941 cartoon called "Notes To You" that starred Porky Pig in the Elmer role and a random alley cat instead of Sylvester.