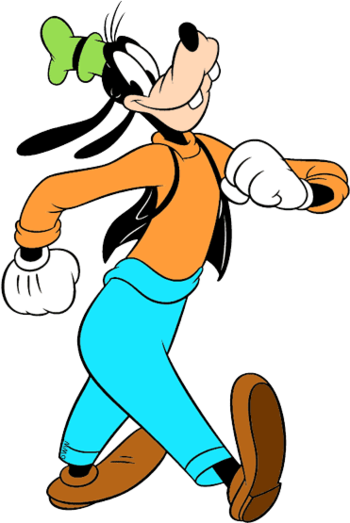 He'll be falling on his face any time now.
"It is difficult to classify the characteristics of the Goof into columns of the physical and mental, because they interweave, reflect, and enhance one another. Therefore it will probably be best to mention everything all at once. Think of the Goof as a composite of an everlasting optimist, a gullible Good Samaritan, a half-wit, a shiftless, good-natured coloured boy and a hick.note  He is loose-jointed and gangly, but not rubbery. He can move fast if he has to, but would rather avoid any overexertion, so he takes what seems the easiest way. He is a philosopher of the barber shop variety. No matter what happens, he accepts it finally at being for the best or at least amusing. He is willing to help anyone and offers his assistance even when it is not needed and just creates confusion. He very seldom, if ever, reaches his objective or completes what he has started. His brain being rather vapory, it is difficult for him to concentrate on any one subject. Any little distraction can throw him off his train of thought and it is extremely difficult for the Goof to keep to his purpose. Yet the Goof is not the type of half-wit that is to be pitied. He doesn't dribble, drool or shriek. He is a good-natured dumbbell that thinks he is pretty smart. He laughs at his own jokes because he can't understand any others. If he is a victim of a catastrophe, he makes the best of it immediately and his chagrin or anger melts very quickly into a broad grin. If he does something particularly stupid he is ready to laugh at himself after it all finally dawns on him. He is very courteous and apologetic and his faux pas embarrass him, but he tries to laugh off his errors. He has music in his heart even though it is the same tune forever and I see him humming to himself while working or thinking. He talks to himself because it is easier for him to know what he is thinking if he hears it first. His posture is nil. His back arches the wrong way and his little stomach protrudes. His head, stomach, and knees lead his body. His neck is quite long and scrawny. His knees sag and his feet are large and flat. He walks on his heels and his toes turn up. His shoulders are narrow and slope rapidly, giving the upper part of his body a thinness and making his arms seem long and heavy, though actually not drawn that way. His hands are very sensitive and expressive, and though his gestures are broad, they should reflect the gentleman. His shoes and feet are not the traditional cartoon dough feet. His arches collapsed long ago and his shoes should have a very definite character. Never think of the Goof as a sausage with rubber hose attachments. Though he is very flexible and floppy, his body still has a solidity and weight. The looseness in his arms and legs should be achieved through a succession of breaks in the joints rather than what seems like the waving of so much rope. He is not muscular and yet has the strength and stamina of a very wiry person. His clothes are misfits: his trousers are baggy at the knees and the pants legs strive vainly to touch his shoe tops but never do. His pants droop at the seat and stretch tightly across some distance below the crotch. His sweater fits him snugly except for the neck and his vest is much too small. His hat is of a soft material and animates a little bit. It is true that there is a vague similarity in the construction of the Goofy's head and Pluto's. The use of the eyes, mouth and ears are entirely different. One is dog, the other human. The Goof's head can be thought of in terms of a caricature of a person with a pointed dome - large, dreamy eyes, buck teeth and a weak chin, a large mouth, a thick lower lip, a fat tongue and a bulbous nose that grows larger on its way out and turns up. His eyes should remain partly closed to help give him a stupid, sleepy appearance, as though he were constantly straining to remain awake, but of course, they can open wide for expressions or accents. He blinks quite a bit. His ears for the most party are just trailing appendages and are not used in the same way as Pluto's ears except for rare expressions. His brow is heavy and breaks the circle that outlines his skull. He is very bashful, yet when something very stupid has befallen him, he mugs the camera like an amateur actor with relatives in the audience, trying to cover up his embarrassment by making faces and signaling to them. He is in close contact with sprites, goblins, fairies and other such fantasia. Each object or piece of mechanism which to us is lifeless, has a soul and personality in the mind of the Goof. The improbable becomes real where the Goof is concerned. He has marvelous muscular control of his bottom. He can do numerous little flourishes with it and his bottom should be used whenever there is an opportunity to emphasize a funny position. This little analysis has covered the Goof from top to toes, and having come to his end, I end."
— Art Babbitt's uncensored Character Analysis of Goofy

Goofy is one of the world's most iconic cartoon characters and the third member of Walt Disney's quintessential Power Trio, along with Mickey Mouse and Donald Duck.

Goofy first appeared in the 1932 Mickey Mouse short, Mickey's Revue. After a few appearances in Mickey's cartoons and joining up with Mickey and Donald in classics such as Mickey's Fire Brigade, Clock Cleaners, Lonesome Ghosts and Boat Builders, Goofy eventually began to star in his own series of cartoons, with his voice provided by Pinto Colvig.

When Colvig left Disney in 1938, Goofy was left without a voice, so Disney made the best of a bad situation and conceived the How to... shorts, where most of the dialogue was done by a narrator, with Goofy's voice provided mostly by stock audio or an imitator until Colvig's return to Disney in 1944. The concept of the How to.. shorts was so well-received that they are a staple of Disney and considered some of Goofy's best cartoons. One of them, The Art of Skiing, introduced his trademark Goofy Holler (YAAAAAA-HOO-HOO-HOO-HOOEY!).

In the 1950s, Disney introduced the "Goofy the Everyman" concept, in which Goofy was transformed into a family man going through common everyday trials such as quitting smoking, dieting, raising children, catching a cold and so on. He is never referred to as Goofy in the shorts of this period (though the title cards still said Walt Disney Presents Goofy)—instead, he's usually named George Geef, though some shorts gave him other names. His character design also changed, making his whole body pale instead of just his face, smaller eyes with eyebrows, removing the long dog-like ears, large buck teeth and his white gloves, giving him a more human-like look and also making him more intelligent and giving him a normal-sounding voice. These shorts depicted him with a wife and son. Often, the rest of society looked just like him, something carried over from the earlier How to... shorts. The humour was also more sedate, mostly poking fun at suburban life in the 1950s. This lasted until Aquamania in 1961, as Goofy reverted back to his old form and voice by 1965's Freewayphobia and Goofy's Freeway Troubles (also known as Freewayphobia No. 2), which were also his last How To... shorts until the 2000's, as well as Pinto Colvig's final performances as Goofy's voice before his death in 1967, after which Goofy's appearances slowed down.

In comic books of the 1970s, he had a Super Hero alter ego, Super Goof, that is still used in Italian and Scandinavian stories.

In the 1990s, he starred in a new TV series, Goof Troop, in which he and his son Max moved next door to a Lighter and Softer version of Mickey's nemesis, Pete. This led to a movie based on the series, A Goofy Movie. Goofy is the only one of the Power Trio to star in a full, non-segmented theatrical feature film.

In recent years, Goofy has re-appeared along with the rest of the gang in the new Mickey Mouse shorts. Goofy is also featured in the Kingdom Hearts video game series as a shield-bearing knight and one of Sora's sidekicks alongside Donald.

One of the most noted qualities of Goofy's slapstick humor lies in the fact that when he does something guaranteed to result in Hilarity Ensues (which is just about everything he does), there is a blatantly obvious outcome as to how it will go wrong - for example, falling off a ledge or crashing into something. The obvious outcome should never be the end of it and must in itself lead to Disaster Dominoes that the audience did not see coming.

Oh, and for the record, he's an anthropomorphic dog. Most of the time, at least.

His current official voice actor, and probably most memorable voice, is Bill Farmer, who is also the current voice of Pluto.