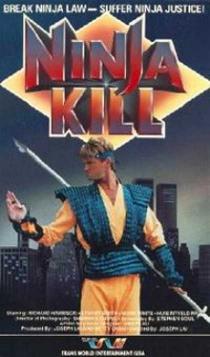 In the eighties, Ninjas were one of the biggest hypes, making not only thousands of young boys fascinated of weird men in pyjama pants fighting pseudo-kung-fu, but — and that's important — also got many people to buy VHSs they would have otherwise rejected, just because they included above-mentioned weird men in pajama pants.

This moved the movie industry to create legendary works like the American Ninja quadrilogy or the unforgettable movies with Sho Kosugi, all of which became B-movies still praised today by cineasts all over the world. But one man went a step further...

Godfrey Ho (alias Benny Ho, Tommy Cheung, Bruce Lambert, Charles Lee, Victor Sears, etc.), a Hong Kong director working together with the equally infamous producers Joseph Lai of IFD Films and Thomas Tang of Filmark, gathered B- and C-movie actors from around the globe to make his legendary Ninja series of films. These usually consisted of a couple of ninja fighting scenes being pasted into a failed or unfinished Hong Kong movie, thus making a new movie out of these shreds. As one might expect, this didn't work out very well, but since many people love ninjas, these movies are still watched today because of their overall narminess and their weird ideas. For anyone curious, many of them can be found on YouTube for free.

It should be noted that many of these didn't feature added ninjas; however, most of the tropes below still apply.

Movies with their own page:

This series of films provides examples of: