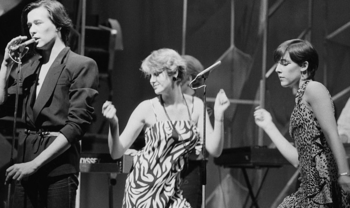 The Human League are a Synth-Pop band from Sheffield, England. They formed in 1978 when the experimental synth duo the Future (consisting of Martyn Ware and Ian Craig Marsh) teamed up with singer Phil Oakey to write pop tunes. At the point they formed, synth music was often in the proggy vein (e.g. Kraftwerk, Vangelis) or in the disco vein (e.g. Giorgio Moroder), but the group took note of the DIY punk aesthetic to create their own dark style of synth music with poppy structures.

Releasing two albums, an EP and several singles, the original lineup split in late 1980 due to Creative Differences, with Ware & Marsh walking out and going on to form BEF, and soon after, Heaven 17. Oakey and their visual director Philip Adrian Wright had to honour touring agreements so added Jo Callis and Ian Burden to the lineup. Additionally, Oakey hired female vocalists Joanne Catherall and Susanne Sulley initially as backing vocalists though the songs got written around their vocals later. This lineup of the group recorded their album Dare, which made them a household name with several singles, most notably "Don't You Want Me".

While the success of Dare would be something of a miracle for the band at the time, it would later become an albatross around their necks, as each following album failed to meet the expectations their 1981 album established. By 1990, the group were generally regarded as has-beens among the general public, something the band themselves lampshaded with their song "The Stars Are Going Out". Their 1995 album Octopus would be seen as a return to form, and their following album, 2001's Secrets, was praised by fans and critics to almost Dare-levels, but it flopped on store shelves. Their next album, 2011's Credo, would receive middling reception from fans and critics. Since then, the band have focused solely on touring and performing.

Despite their rocky history, the Human League are generally considered to be one of the most influential bands of the synthpop era, often being considered a Trope Codifier for the genre alongside Kraftwerk. Dare and its associated singles are still fairly well-remembered as high points of 1980's pop music, and several of their songs have continued to find new audiences through inclusion in movies, TV shows, commercials, and video games.

There's a fan website dedicated to preserving the content of Mk. I Human League, as linked here

The Human League provides examples of: