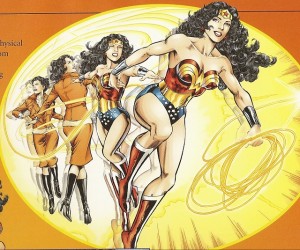 The Instant Costume Change is an ability of Super Hero characters to change from their street clothes into their hero costumes, well, instantly. This doesn't include characters who wear their costumes under their normal clothing. The Instant Costume Change is usually accomplished by some bit of Applied Phlebotinum that automatically transforms the character's clothing with little action; often a button push or just a thought. When the hero detransforms, whatever clothes they were wearing before they transformed reappear, even if they're wearing something like a heavy winter jacket, a yukata, or a long-sleeved shirt while their hero costume has short sleeves, a crop top, or a tight bodysuit. Accessories like headbands or scarves that aren't part of the hero costume will usually disappear as well.

Virtually all Henshin Heroes perform an Instant Costume Change when they transform into their powered modes. But other characters can have this ability as well. The exact mechanism by which the trope operates varies from character to character, but some common methods include nanotechnology, morphable cloth, magic, and alien tech.

See also To the Batpole!, Flung Clothing, and Instant Armor. Sometimes involves a Transformation Sequence and often a way to justify Transformation Is a Free Action.

SpongeBob changes into his PJs rather quickly.

SpongeBob changes into his PJs rather quickly.