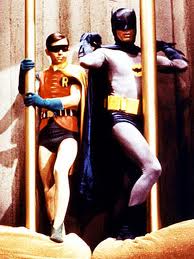 Naturally, this is an opportunity for Stock Footage, especially in animated or puppet productions. A close cousin to the Super Multi-Purpose Room.

Fridge Logic might start to set in if the super-cool sequence takes so long, the threat they were leaping into action to prevent would have already long been either committed or neutralized by the time they're done actually sliding down the Batpole.

May overlap with Red Alert, especially in the emergency response team/firefighter variant. Not to be confused with To the Batnoun! or Hyperaffixation (although examples sometimes overlap).