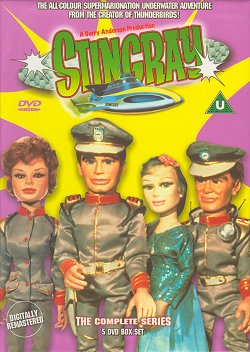 "Stand by for action!"
"It dives under the sea, into the world below
Where beauty and mystery can always be found
It dives fearless and free, chasing the strangest foe
But against all adversity, sails homeward BOOOOOOUND!"'
Advertisement:

Stingray is a children's marionette television show, created by Gerry and Sylvia Anderson, that ran from 1964-65. Stingray was also the first British television programme to be filmed entirely in colour (the earlier series The Adventures Of Sir Lancelot had been made in colour from halfway through its run thanks to NBC money - although British TV viewers wouldn't get colour television until 1967).

Set 20 Minutes into the Future, the show's focus was the day-to-day adventures of the crew of WASP, the World Aquanaut Security Patrol (why, what WASP were you thinking of?), a Californian naval organization dedicated to keeping the world's waters free of any danger — in particular, any danger caused by the Aquaphibians, a race of evil fish-men. Helping them to lead the way is Captain Troy Tempest, who pilots the titular Stingray submarine alongside George Lee "Phones" Sheridan (so named because he operates the ship's hydrophones).

The organization falls under the direction of Commander Sam Shore, who now uses a hoverchair around the base as a result of a submarine accident. His daughter is Atlanta Shore, the assistant communications officer who loves Troy Tempest from afar.

Tagging along with the two pilots is a mute, tail-less mermaid by the name of Marina. It's revealed All There in the Manual that she is actually forbidden by her ruler Titan to ever speak (if she does so, he will destroy her people). Unfortunately for Atlanta, Troy seems to be attracted to her.

All of the underwater sequences were shot dry-for-wet by filming the puppets or models through narrow water tanks containing small fish and bubble machines, and using lighting effects to give an underwater look.

A compilation movie of the series, Invaders from the Deep, was the very first film ever riffed in Mystery Science Theater 3000, in its local-access season on KTMA-TV23 in Minneapolis.

It has nothing to do with the American '80s series of the same name.

Any tropes can happen in the next half hour!