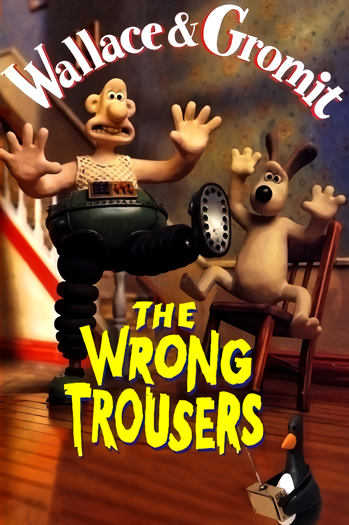 The Wrong Trousers is the second Wallace & Gromit short film, made by Nick Park and Aardman Animations and released in 1993.

The story begins on Gromit's birthday, and Wallace has a special present for him: "Techno-Trousers," robotic pants with the ability to move by themselves ("Ex-NASA! Fantastic for walkies!"). At the same time, Wallace decides to rent out a room in the house to deal with his growing debt. Their lodger is Feathers McGraw, a shady penguin who immediately takes a liking to the trousers and a disliking to Gromit. As Feathers becomes favoured by Wallace, Gromit starts to feel like he's being replaced and makes plans to leave. But the morning after his departure, Wallace gets stuck in the Techno-Trousers, the controls of which have mysteriously disappeared, along with Feathers...

The short won the 1993 Academy Award for Best Animated Short Film. It established many of the story and character elements now commonly associated with the series, mainly Wallace's Rube Goldberg-esque inventions and Gromit's role as the Silent Snarker, not to mention that the animation got a lot better.