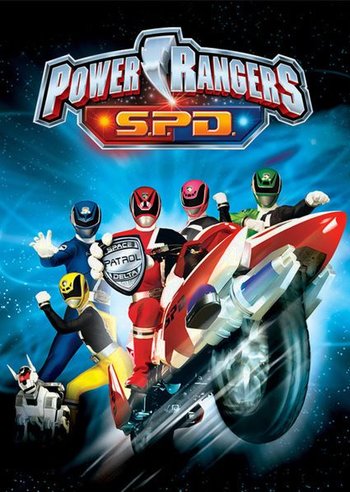 Power Rangers, 20 Minutes into the Future. Power Rangers S.P.D. is the thirteenth season of the franchise, based on Tokusou Sentai Dekaranger. The Earth of 2025 is a very different place, where humans and alien immigrants live in relative peace. There's always a few bad eggs, though, and that's where S.P.D. (short for Space Patrol Delta) comes in. Started on the planet Sirius, it's now a galaxy-wide police organization. The Earth branch is based in Newtech City, headed by Anubis "Doggie" Cruger.

The series focuses on S.P.D.'s B-Squad. As their name indicates, they're backup to the elite A-Squad. At first, B-Squad consists of the serious Sky (who wants nothing more than to be a Red Ranger just like his father), Cloudcuckoolander Bridge, and the rich former model and pop idol Syd. When A-Squad is forced to leave the planet on business, they're promoted to Ranger status, and given morphers. Sky is not pleased to learn that he's only a Blue Ranger. Their first mission is to track down a pair of metahuman Robin Hoods, Z and Jack. They were probably chosen for the task because they're metahumans, too. Much to the dismay of B-Squad, Cruger decides that the best punishment for Jack and Z is to become the Red (especially to Sky's chagrin) and Yellow Rangers. It takes a while, and they often relapsed back to being bitter and angry at each other, but they eventually become a tight unit, and even tighter when they learn why they all have strange, genetic powers...

Unusually, rather than a two part with the previous season's cast, there were two separate episodes with the Dino Thunder Rangers, with each team getting a chance to enter the world of the other. For some reason, those specific episodes seem to flow better if you watch them in reverse order.

Succeeded by Power Rangers Mystic Force. Bridge would later appear in the Once a Ranger Milestone Celebration, being bumped up to Red Ranger status due to Xander from Mystic Force and Tori from Ninja Storm (Bridge had ended the series as the Blue Ranger).