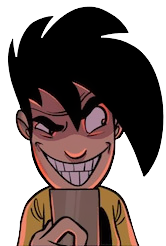 Hell of a friendly grin there...
"I will employ some manner of surveillance so that when I leave a room and a traitorous comrade gives me the Malicious Scowl or Wicked Leer to my back, I will have ample warning of his impending betrayal."
— The Things I Will Do If I Am Ever The Hero
Advertisement:

So, you've got this character, Alice. Seems like a nice enough person, interacts pleasantly with the heroes, maybe offers them some help or advice. And then the heroes leave the room, or just turn their backs. The camera however, hangs around watching Alice for a few seconds. And sure enough, as soon as no one's watching, Alice starts looking shifty, or even downright evil. This is the Traitor Shot, a close-up on a character for no apparent reason, which is practically a guarantee that at some point, that person will betray the heroes in some way.

The Traitor Shot is a way to let the audience know that they should be suspicious of a particular character before that character has done anything to earn this suspicion. Depending on exactly how the character behaves during the few seconds that no one but the audience is watching them, it can either be a subtle clue or a giant, blinking "This Person is Evil" sign.

There are a few common ways to set up a Traitor Shot: changing from a side view of a hug to the front of one person's face. Changing from medium distance group shots to a close up of someone looking at the camera. The camera moving from a group of people in ensemble then moving across landscape and then settling on one person.

This trope is so common that a director can set up a Red Herring Mole just by giving them a few Traitor Shot moments, and then not making them evil. It also appears in Ebert's Bigger Little Movie Glossary under the heading "Unmotivated Close-up".

Revealing Hug is one way of employing this trope. Not to be confused with what happens when a character is Rewarded as a Traitor Deserves. For another way to find the guilty party before The Reveal, see Narrowed It Down to the Guy I Recognize.

NOTE: Since this trope deals with betrayals, this page will contain spoilers.

At the end of Rapunzel's journey, one of her party shall turn against her.

At the end of Rapunzel's journey, one of her party shall turn against her.