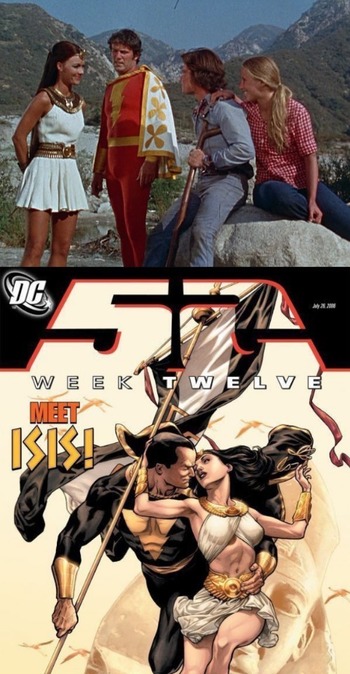 The Breakout Character from the TV show makes her belated debut in the comic book that started it all.
Advertisement:

The adaptation is a wonderful place, where new ideas can frolic without having to worry about fitting into the canon. However, sometimes an idea is so interesting that the people who create the canon decide it deserves to be included.

Thus, we have the canon immigrant, who is a character created and nurtured in another medium and, eventually, imported back into the original. Note that, often, surface details are brought in to play off a new movie or TV series; this isn't that. Rather, it's usually a completely new character, who over time becomes more and more popular with the fandom, often filling some niche that was never quite complete before. As a recurring trend, these tend to be female characters (likely to be "spunky") who serve to break up an otherwise male Rogues Gallery or ally contingent.

If they're successful enough, they'll be included in new entries in the expanded universe, cross-pollinating concepts. Canon immigrants are often part of an adaptation distillation, and the new, canonical version usually has extra details to tie them into the more complex backstory of the original.

A character is more likely to become a canon immigrant, and be embraced as such, if they are a God-Created Canon Foreigner.

This applies exclusively to characters or concepts who make the move from adaptation to original material. When dealing with alterations to existing canonicity that ends up changing the original material, see Ret-Canon.