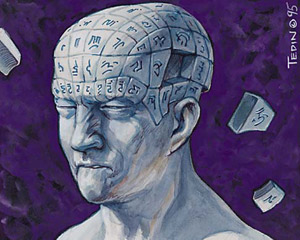 Why, yes, I'd like a piece of your mind.
I'll take this one and that one...
Yuuichi: If you really have amnesia, then how come you said that you were never gonna forgive me?
Makoto: Look, all I do remember is that I have a grudge against you! I just don't remember anything else about my life, ya' got it?!
Yuuichi: I guess I never knew that amnesia could be so convenient.
— Kanon

As established elsewhere, amnesia comes up a lot in TV. Amnesia is a funny thing in the real world and can give you lots of strange symptoms.

In TV, it's very weird too, but it's much more specific. Amnesia has several basic attributes in TV land:

1. With surgical precision, amnesia strips you of all information pertaining to personal identity, leaving just about everything else intact. TV Amnesia is a disorder where you forget where you put your keys, but you do not forget what a key is or what it's for. You will forget where you went to school, but not any of the things you learned in school. As a result, the character will retain all of their skills — though they may not know they have them at first.

Interestingly, while this would seem to be Hollywood Science at first glance, this really is how retrograde amnesia works (well, some of the time). "Procedural memory", which governs skills that the brain has automated, appears to be separate from "declarative memory", where you store previous facts and events, and in many cases only one of the two is damaged. And then there's muscle memory,

which may or may not be affected by amnesia.

2. In a series with Plausible Deniability, amnesia typically also erases all knowledge of the Masquerade. The character will completely forget that aliens, monsters, vampires and such are real, but will remember that normal people don't believe in such things. This can seem especially odd since, if you don't remember anything, how do you know that aliens and werewolves are any stranger than the sun coming up in the morning and setting at night?note Probably not so odd after all: if you started to believe in those things only after having encountered them yourself (which is almost always the case — otherwise why bother to wipe your memory at all?), you might revert to your original belief once you can't remember the encounter. And even if you can't remember what "normal people believe in", one can bet they'll remind you of it very quickly once the subject is brought up in conversation — and now you have nothing to retort with. Even more odd if the character is himself an alien or supernatural being and subsequently "defaults to Muggle" after losing his memory, which is typically the case for those with Alternate Identity Amnesia. Occasionally, this is paired with Fake Memories to create an elaborate deception.

3. With very few exceptions, amnesia is always entirely retrograde: memory loss extends backward from the moment of injury. Anterograde amnesia (the inability to accumulate new memories) has only started to come up in recent years, usually in comedies. Amnesia usually extends back clean to birth. Real amnesia resulting from head trauma or drugs is usually confined to a short period on both sides (before and after) of the incident.note One exception to this is the horror game Blight Dream, which deals entirely with anterograde amnesia in a serious manner.

4. If a tool of the group the protagonists belong to, the likelihood of abuse of this power is almost never addressed. There's little interest, procedure, or advocacy devoted to making sure someone isn't stealing from, raping, killing or committing other crimes against Muggles and then erasing their memory of it. After all, who cares about Muggles as long as the Masquerade is intact?

5. The amnesia inducer works like a toggle switch (especially in the case of blunt force to the cranium). (Surgeon General's Warning: Definitely NOT Truth in Television.)

Very useful in maintaining that things are no big deal. To this end, it's pretty standard for The Men in Black to use this on anyone who's seen too much, often employing a Memory-Wiping Crew. Contrast Exposition Beam. Can cause an Amnesiac Hero to be born.

To heal Anna after she's struck with Elsa's ice powers, Grand Pabbie alters her memories so that she doesn't remember about her sister's magic.

To heal Anna after she's struck with Elsa's ice powers, Grand Pabbie alters her memories so that she doesn't remember about her sister's magic.