Comic Book / One Moment in Time 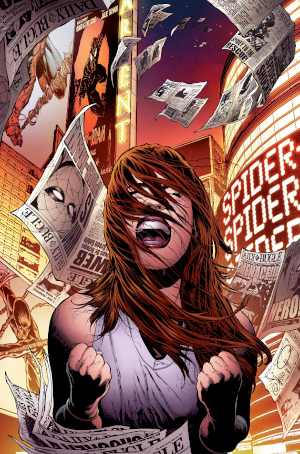 "See, to me, the reason I wanted to get married was to have kids. If that's no longer a part of the equation, then marriage is just a piece of paper."
— Mary Jane
Advertisement:

After One More Day, any retcon in the Spider-Man continuity other than the main ones (summed up in a two-page spread following that saga) was left unexplained, much to the fans' chagrin; Joe Quesada's response to most fan questions came in the form of a Shrug of God or assertion that A Wizard Did It.

Fast forward to summer 2010, where Quesada finally gave fans some answers throughout four issues of ASM, entitled One Moment in Time. Obviously, the announcement of answers — as well as a chance to see Peter and MJ getting back together — coming was met with rejoicing... initially.

Unfortunately, the story mostly chose to resolve the problems with One More Day by simply retconning them away, leaving a sizable number of fans less-than-satisfied.

Back in what was supposed to be their wedding week, Mephisto quietly releases an apprehended thug and Peter is badly injured trying to recapture him, causing him to miss the ceremony. This leads MJ to reconsider marriage, instead settling for a committed-monogamous-but-not-official relationship.

Fast-forward to the events of One More Day; Aunt May makes a miraculous recovery, but this prompts the Kingpin to take out another hit on Mary Jane's Aunt Anna. When Mary Jane gets hurt protecting her, Peter regrets ever revealing his identity and begs Doctor Strange to make people forget. Strange talks Reed Richards and Tony Stark into helping out, setting it up so that only Peter will remember what happened. However, Peter spares Mary Jane the mindwipe too, but afterwards she tells him she can't deal with putting other people in danger just by knowing Spider-Man and leaves him. In the present, Peter and MJ patch up their relationship - but deciding they're Better as Friends, with MJ telling Peter to get over her and find someone else.

In case you're wondering about the other Brand New Day changes that were explained outside of OMIT: Harry turned out to have been just hiding. Jackpot wasn't Mary Jane Watson, but someone else entirely who looked like her. And Peter's organic webbing and some other newer powers were explained by Word of God to be unavailable, either due to Power Incontinence or they're part of a Heroic Safe Mode.

(NOTE: Please help move One Moment in Time-specific examples from the One More Day page.)

One Moment in Time provides examples of the following tropes: