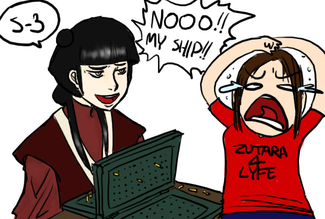 in love and Battleship.
"Also, I think I ruined a solid year's worth of perfectly good shipping with recent revelations. WHOOPSEE DAISEE"
— Andrew Hussie, after a particular twist in Homestuck
Advertisement:

A Ship Sinking is a scene blatantly set-up to demonstrate that a particular romantic pairing is ridiculous, impossible and never, ever gonna happen.

Though many producers and writers are aware of Shipping in their respective fandoms, that doesn't necessarily mean they like it. It may be because of the actions of the fans if they get too rowdy about it, or they just don't like the pairing involved, or have intended the pairing to die for dramatic effect. They may have set out from the start to write two characters into a specific pairing and need to make it more obvious, or have simply decided on an alternative set of partners for the two characters in question. Whatever the reason, the creator wants to make it very clear to the audience that these two particular characters are not, and will not become, a couple.

In order to qualify as ship sinking,

It can be a betrayal, a very sudden familial connection, hooking up with someone else, having the respective love interest kick the bucket, really being only friends or like brother & sister, or maybe they just bring them out of the closet.

Creators often Ship Tease two characters before they sink the pairing completely, although that's not a requirement, as long as the work contains some textual acknowledgement of the idea of the pairing.

This may or may not cause fans to abandon the ship— then again, some ships refuse to sink, with the help of ludicrous amounts of Shipping Goggles or outright Fanon Discontinuity.

Related to Anchored Ship, which occurs when factors arise that preclude the characters getting into a relationship, but have the potential to be resolved. If an Anchored Ship is never resolved before a work is finished, the moment of the anchoring will become a Ship Sinking moment.

Contrast Shipping Torpedo, when a ship is sunk or attempted to be sunk by the characters, not the writers. See This Index Broke Up for tropes about breaking up relations that actually exist in the work, regardless of the fandom preferences.

Compare No Hugging, No Kissing, where romance as a whole is avoided in canon.

If you're looking for the trope where a literal sailing vessel sinks, you'll find it at Sinking Ship Scenario.

STOP BLOWING HOLES IN MY SHIP!

Mickey obliterates the Mick+June ship. June herself is distraught, to add insult to injury.

Mickey obliterates the Mick+June ship. June herself is distraught, to add insult to injury.