Film / Pirates of the Caribbean: The Curse of the Black Pearl 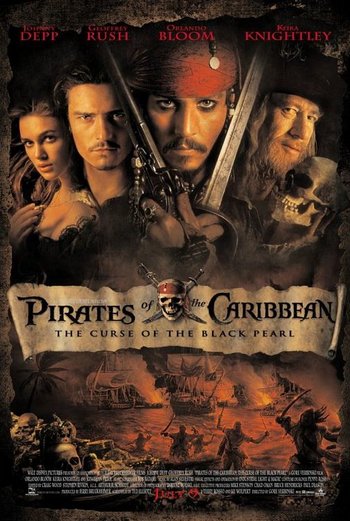 "When you marooned me on that god forsaken spit of land, you forgot one very important thing, mate: I'm Captain Jack Sparrow."
"You best start believing in ghost stories, Miss Turner. You're in one!"
— Hector Barbossa
Advertisement:

The Curse of the Black Pearl (2003) is the first movie in the Pirates of the Caribbean franchise.

The movie begins when Will Turner, the sole survivor of a shipwreck, is found by a ship carrying his future love interest, Elizabeth Swann, the daughter of the royal governor, who takes a medallion from him. Eight years later, Will is a blacksmith in Port Royal. A pirate captain, Jack Sparrow, arrives in a crowning entrance high on the mast of a... sinking dinghy, only to be arrested after a couple fateful run-ins with Elizabeth and Will. That night, the town is attacked by more pirates, but Elizabeth persuades them to call off the attack in exchange for the medallion.

Unfortunately for her, the pirates, led by Captain Barbossa, sail off with Elizabeth, but Barbossa tells her the Backstory. They have been cursed for stealing Aztec gold, doomed to forever exist as undead creatures who can not gain satisfaction from eating, drinking, or even the simple pleasure of a warm breeze; even the final peace of death is denied to them. Now they must collect all the coins and return them, along with blood from each pirate. Since Elizabeth gave them her name as Elizabeth Turner, they think she is the daughter of a missing crewman and they need her blood. Jack likewise has ties to them, as before they were cursed, their ship, the Black Pearl, was under his command before Barbossa took it over. Now Jack is looking to get it back, and Will springs him from prison in exchange for Jack's promise to help rescue Elizabeth.

The Curse of the Black Pearl provides examples of:

"But... where has the rum gone?"
Feedback