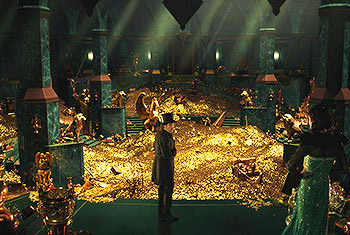 A staple of role playing games, video games, movies, TV, and wherever stories are told is big room full of treasure. Money, gold, and jewels in improbable quantities are a staple, but anything valuable can turn up in a pinch — silks and furs, paintings, weapons, rare or ancient artifacts, and anything else considered a valuable luxury can be found in these vaults. A story's MacGuffin is also likely to be found here. These are usually not organized very well, with all the wealth just piled in together like an episode of Hoarders: Filthy Rich Edition. Such a room is often trapped or guarded by a monstrous beast, most frequently a dragon.

Often a cause of Laser-Guided Karma due to all the Death by Materialism. Sometimes The Hero might get all of it, but generally they only manage a choice piece or two, if anything. In many scenarios there will be some sort of cave-in, massive flood, or other such death trap which will inevitably chase the hero/heroes out. And since it would take a few days or maybe a week to dig it back out, the treasure is clearly lost forever. Apparently adventurers have never heard of modern excavation equipment.

Heist films live off this trope. May overlap with Pooled Funds or Dragon Hoard. See also City of Gold.

The pirates store their stolen treasure in a cave on the Isla de Muerta.

The pirates store their stolen treasure in a cave on the Isla de Muerta.