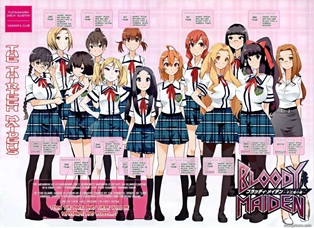 SACRIFICE FOR THE REPOSE OF SOULS
THIRTEEN
MAIDENS

Created by Taida Kikuhiko and Hanao Sutaro, Bloody Maiden: Juusanki no Shima is a Slasher Movie manga, with many of the standard tropes played very straight. Because of this, it is mature; and as you can tell by the number of spoilers on here, there are Death Tropes abound.

It is the 16th century. A group of bandits known as the Kidoshu wander Japan, plundering and storing their vast treasures on Toomariki Island. However, they don’t escape the law for long, and eventually are caught, crucified, and burned alive. Over time, their legend fades, leaving the island and the museum on it as the only monument to them.

Flash forward a few centuries. Onitsuka Miaki and Koizumi Suzuka, along with the ten other girls in their naginata club and their advisor, go to Toomarimiki for a retreat to hone their skills. However, the gruesome past of the island rapidly catches up, and as one after another gets brutally offed, they have to band together to find who the killer is, and fast.