Literature / Xuthal of the Dusk 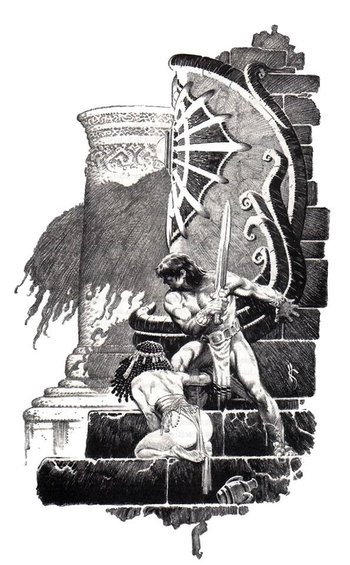 " (a.k.a. "The Slithering Shadow") is a Conan the Barbarian story written by Robert E. Howard. First published in September, 1933.

Conan and Natala, a woman he rescued from slavers, have become lost in the desert after Conan's forces are decimated in a surprise attack. Fearing either capture or death of dehydration, Conan prepares to Mercy Kill the two of them, until Conan spots what appears to be a city in the distance.

The city has a violet glow about it and is surrounded by hundred foot walls. They are let in by Thalis, a former slave herself who came upon the city in much the same way Conan and Natala did. She instantly takes a liking to Conan, and invites the two of them to dinner. As they pass through the empty streets of the city, it becomes apparent that something is amiss. Thalis explains that the people of the city live in a constant state of dreaming, with their bodily needs taken care of by their technology. The only thing they have to worry about is Thog, the Eldritch Abomination who lives under the city and gives it its power, coming up every now and then looking for a meal.

Natala begs Conan to leave, saying that such a city is cursed and unnatural, and Conan agrees, but Thalis won't have it: she wants Conan all to herself and plans to sacrifice Natala to Thog!