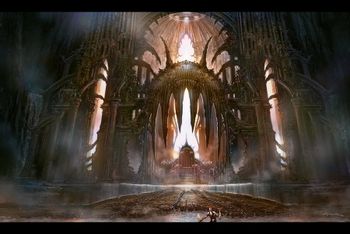 The realm of Hades. Kratos comes here a lot.
"Everyone goes to Hell. Everyone."
— Danny Estacado, The Darkness
Advertisement:

The Underworld is often a gloomy, depressing realm, if only because it is often depicted as being Beneath the Earth. (The fact that people go there after they die might have something to do with it, too.) Still, it isn't evil. It's not Hell. All of the dead come here, whether they were saints, total jackasses, or just kinda so-so in life. Some versions of the Underworld judge the dead and grant them different living standards (or unliving standards, if you prefer) depending on their conduct in life. In others, there's no real judgment, and life — or whatever — continues much as it did before. Possibly they receive, in due course, a chance to go back.

See also Heaven and Hell, the Underworld's more exclusive counterparts. Despite its normally neutral nature, the Underworld, especially the Greek Mythology version, is susceptible to being Hijacked by Jesus and becoming Hell. Expect intrepid mortals to mount an Orphean Rescue for a loved one. See also Afterlife Antechamber, which is a waiting room or brief rest stop on the way to the true afterlife. Compare and contrast Mundane Afterlife. If you were looking for the criminal “underworld”, try The Mafia.

Not so present in movies.

If you were looking for the band, it is at a different realm.