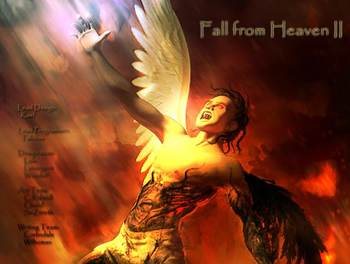 "Hear me, mortals, and heed me well. Whispers of forgotten lore have found my ears, the currents of time flows through my veins with every beat of my heart and bear visions of death and despair... ...As the wickedness of man takes hold of him, darkness will start to engulf his world. At first he will see nothing, only a few of the most gifted will even sense the change. The world will go on as it has, for a time, but the seed of its downfall has been sown..."
Advertisement:

A Dark Fantasy mod for Civilization IV, arising from the CivFanatics Civ boards, and one of the game's most famous mods. It is vaguely based on the originator (Derek "Kael" Paxton)'s long-running Dungeons & Dragons game.

After the Age of Ice, the various tribes of the world of Erebus are forming into civilizations once again, seeking to reclaim the glories of a previous age, leave their own mark upon Erebus, conquer everything in sight, or just blow it all to Hell. But untamed Erebus is not a nice place, and many of the civilizations (possibly including your own) will quite happily make it even worse.

A prequel to the mod, Fall from Heaven: Age of Ice was included with the Beyond the Sword expansion for Civilization IV.

You can get it here

. A standalone sequel was in the works, but has now been cancelled. (see here

) That being said, there's mods of the mod itself that are still being worked on