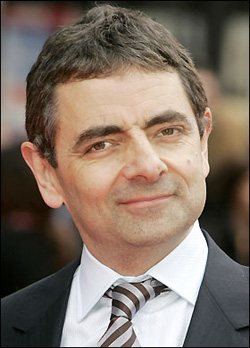 "No, well I don't tend to find things funny."
— After being asked if he ever laughed at his own work.
Advertisement:

He is famous for his work on the classic sitcoms Blackadder, The Thin Blue Line and Mr. Bean, as well as doing voice-over work in The Lion King and sketch comedy in Not the Nine O'Clock News. He has also appeared in movies, such as Four Weddings and a Funeral and Love Actually.

He is a master of the Deadpan Snarker and has a filmography that would make most other actors go green in envy with most of the things on it a major success. A perfectionist to the point of frustration, he is infamous for stopping partway through a take and apologizing because he wants to try again. He is also, by his own admission, not nearly as funny in real life; Edmund Blackadder and Mr. Bean are the result of tight scripting and detailed acting, rather than anything spontaneous.

Behind the scenes, he's a car enthusiast and has been known to take part in auto racing. In Top Gear he was once the second fastest "Star in a Reasonably Priced Car".note and has wrapped at least two seriously unreasonably priced cars around trees while about his lawful occasions on the Queen's thoroughfare, fortunately without any serious injuries. He also has a degree in electrical engineering.

Being a car enthusiast, he has some Improbably Cool Cars, including a McLaren F1 whom he had crashed and repaired twice, before he actually sold it.

In 2013, he was awarded a CBE, while his Blackadder co-star Tony Robinson got a knighthood.

He also has a repertoire of stage comedy routines, which include:

These provide examples of: