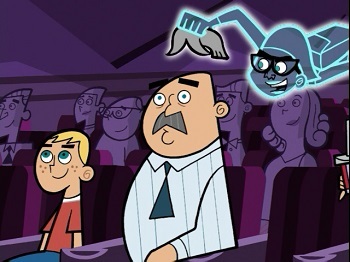 If I ever find out who did that, there will be hell toupee.
"While most great powers come with great responsibilities, the power of invisibility isn't one of them. In fact, shirking responsibility is sort of the point of owning an invisibility suit in the first place."
— Soren Bowie, Cracked
Advertisement:

Characters who gain the power of invisibility have a startling tendency to become jerks, if not outright homicidal maniacs, within fairly short order. Sometimes this is a result of power that makes the character invisible but more often it seems to be a natural side effect of invisibility itself. After all, you can't be punished for your actions if nobody even knows you're there.

Such invisible people must beware of animals who rely more on scent and hearing than they do sight such as large implacable guard-dogs. Such creatures would still know, perfectly well, that somebody was there. In some works, over-confident invisibility has come to grief because of inconvenient rottweilers.

Not related to the trope What You Are in the Dark, but related to the saying it comes from. See also Time-Freeze Trolling Spree, Villain Teleportation, Invisible Streaker. See GIFT for the equivalent result when applied to anonymity on the internet. See also Power Perversion Potential for other things you can use invisibility to get away with.

The invisible SpongeBob and Patrick trick Bikini Bottom into thinking they're haunted by ghosts.

The invisible SpongeBob and Patrick trick Bikini Bottom into thinking they're haunted by ghosts.