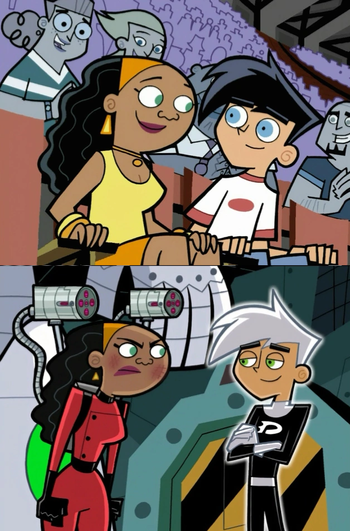 And I heard Harry's said he wants Spider-Man dead
Aw, but his buddy Pete he can trust
— "Weird Al" Yankovic, "Ode to a Superhero"
Advertisement:

Many people have a Secret Identity, and since the whole point of a secret identity is to have as few people know it as possible, sometimes you might get a person who likes that guy in the office without realizing he's actually the superhero they absolutely hate, and in the worst of cases are trying to kill.

See Loves My Alter Ego and Hates My Secret Identity, both of which play with inverting the dynamic of this trope, the former being summed up as "In Love With Superman, Indifferent to Clark Kent" and the latter, "Adores Superman, Hates Clark Kent." Contrast Two-Person Love Triangle.