Fan Fic / Sure as the Setting Sun 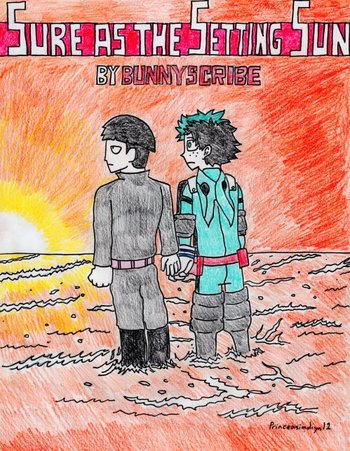 If everyone is not special then you can be what you want to be, the time is upon you to show them what you can do and soon they will know that your day HAS COME!!

Mob never aimed to be a hero, despite being an apprentice to one. He only wanted to make sure his quirk never hurt anyone ever again. However, an incident that occurs in his third year of middle school spurs him into action despite his wishes. Mob enters into UA academy, the top heroics school in all of Japan, and winds up with several new friends and much more trouble than he bargained for.

Sure as the Setting Sun

is a Mob Psycho 100/My Hero Academia Fusion Fic written by bunnyscribe. Like the description says, after graduating from middle school, Kageyama Shigeo, or "Mob" as his friends call him, enters UA at the encouragement of his master Reigen.

Sure as the Setting Sun provides examples of: