Forgot About His Powers 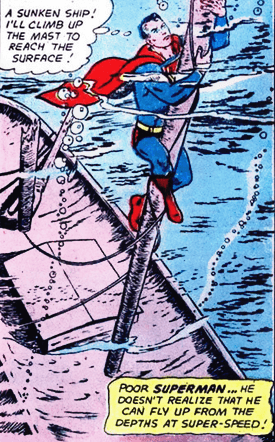 Assuming, of course, that Superman also has super not-getting-the-bends

When a character has the Idiot Ball slipped into their pocket while they weren't looking, causing them to forget to properly use their abilities or powers to stop a villain or get out of a situation, even though they may have used the ability in similar situations before (often many times).

As the title indicates, this often happens with superheroes. This is used quite a bit when characters have extremely useful or increasingly powerful abilities or equipment, and some unfortunates tend to have this inflicted on them all the time, turning a Genius Bruiser or Badass Bookworm into a garden-variety Bruiser or Badass. Only some lines of technological jargon or displays of useless gadgetry will remind the reader that they have more brains than they normally use. Some might consider this a form of Informed Ability, with the "ability" being genius-level intelligence. It's especially bad when the power being forgotten about is an innate ability that the character was born with, which makes it roughly akin to a Muggle forgetting he can walk.

Amnesia Danger is a variant of this trope, when it's justified using convenient amnesia. The heroic version of Why Don't You Just Shoot Him?, except while at least villains don't have to answer to their actions, heroes should be obligated to stop evil-doers or disasters as quickly and efficiently as possible.

See Fridge Logic for when it occurs to the viewers a little later what the character could've/should've easily done. See Remembered I Could Fly when it occurs to the character Just in Time what he should've done long before. Plot-Sensitive Snooping Skills is a particular variant/sub-trope. If a device is discovered once, never becomes part of a character's standard bag of tricks, and is forgotten that is Forgotten Phlebotinum. Hollywood Tactics are a usual result. Compare Drama-Preserving Handicap and New Powers as the Plot Demands.

As mentioned, this is a sister trope to Idiot Ball, the distinction being that Idiot Ball is when a character does something stupid to further the Plot, while with Forgot About His Powers the plot depends on a character failing to take an action they would normally take or that would make the most sense to solve the current crisis.

In video games, this is a common way for a character to start out prior to the tutorial levels, with the abilities the player only learns later in the game being things the character knew all along. On the other end, this combined with branching skill trees is the main source of Cutscene Incompetence, as the character written into the cut-scenes doesn't remember the potion of resurrection the player picked up half an hour ago when mourning a slain companion or that he picked up the skill allowing flight when falling off something tall.

Compare Reed Richards Is Useless, where a character with superhuman abilities or ridiculously advanced technology reserves it for equally advanced problems and never applies it to mundane difficulties, and Superman Stays Out of Gotham in which another character in the same universe is conveniently not around to easily solve the problem for the protagonist. See also Useless Superpowers, where there's some reason the character can't or shouldn't use their powers when they would be useful.

Contrast Took a Level in Badass and Dumbass No More.

Alternative Title(s): Forgot About Her Powers