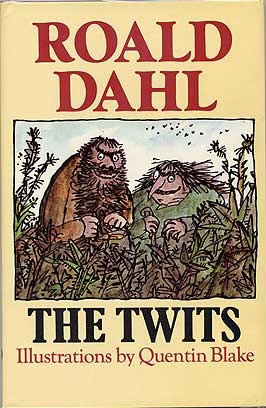 What I am trying to tell you is that Mr. Twit was a foul and smelly old man.
Mrs. Twit was no better.
— The Narrator
Advertisement:

One of Roald Dahl's many morbidly comic children's books, The Twits is a novella about Mr. and Mrs. Twit, an inexplicably married couple who despise one another, smell, and are generally horrible people who are cruel to animals.

The first couple of chapters describe the couple and their lack of hygiene with a delighted glee; then there are several chapters of them playing increasingly mean tricks on one another, including Mr. Twit convincing his wife that she has a disease called "The Shrinks". Finally, the focus shifts to some of the animals they have been tormenting — and how they get their revenge on the horrible couple once and for all.